If you’re a tree-lover, the sight of ivy on trees might cause you some stress and anxiety. After all, the way in which it grows upwards and covers the bark of trees might look like an unhealthy biological relationship with ivy taking up the tree’s nutrients all for the sake of its own growth.

At first sight, it seems like a parasitic relationship with ivy coming out as the winner. And this begs the question: does ivy kill trees? While it may appear that it’s not a relatively symbiotic relationship, ivy is a plant that is commonly misunderstood, and some myths about it need to be busted once and for all.

So, does ivy damage trees?

Ivy can be identified as a dark, evergreen climber with a solid, and often hard, root system. It can be found as a groundcover or on the barks of certain trees, and in some cases, it can climb right up to the tree’s canopy, later on to flower yellow-green flowers and even spurt some berries.

So, does ivy kill trees, particularly in the UK? The proposition that ivy kills trees is not an altogether accurate one. Let’s take a closer look at the reasons behind this.

Firstly, the root system. While it’s true that ivy growing on trees has a root system that develops next to that of a said tree, it’s not necessarily true that ivy will cause any damage to it. They may share the same soil, but the depth of the tree’s roots and the depth of the ivy’s roots are not the same, and therefore, there’s little competition for water and nutrients found in the soil. Although ivy might be thought of as a parasitic plant, this is not actually the case, as with mistletoe, as it can’t penetrate the tree’s bark and root system.

In addition, ivy tends to choose more mature, well-established and healthy trees to climb, the latter of which usually have a well-established root system, with which the ivy doesn’t necessarily compete. For trees that are bare or weaker, ivy can, indeed, cause some damage, but this is not usually the case for healthier trees. Or in other words, an ill-looking tree, covered in ivy leaves, most likely suffers from another disease - or pest-related issues.

What’s more is that ivy creates a suitable habitat for many wildlife species, such as butterflies, birds and other pollinating insects. This is especially the case during the cold, winter months where warm hiding places are hard for these animals to come by. Ultimately, ivy is a helpful creeper if you’d like your garden to be friendlier to wildlife.

So, does ivy damage trees? While an often misunderstood plant, it does not necessarily damage trees (of course, this depends on the type of tree), and its reputation as a plant that’s damaging to trees needs to be revisited.

When should you be concerned about Ivy plants

In the section above, we tried to debunk the myth that ivy growing on trees is harmful. But are there cases where this creeper can actually cause harm? The truth is that there are.

This is the case, for example, with older, vulnerable and rotten trees. These tend to fall or bend during windier weather. The ivy on such trees tends to add more weight to them and, therefore, helps to bring about their downfall.

Another aspect where ivy can be harmful to trees is when the leaves and vines of the ivy move up and through the tree’s canopy, adding additional weight to it. In such cases, the ivy’s leaves can hinder the tree’s ability to photosynthesise by suppressing its leaves and branches. However, this is not sufficient to kill an otherwise healthy tree.

As for aesthetics, you might consider pruning the ivy growing on your trees, in order to have a healthy tree bark. What’s more is that ivy can block the bark, and if you have a birch tree, for example, this simply won’t look appealing and your birch tree’s beauty won’t be fully revealed and apparent. So, for aesthetic purposes, consider trimming down, pruning or completely removing the ivy around your trees for better and more pleasing visual effects.

We offer quality ivy trimming and removal services in London and around. 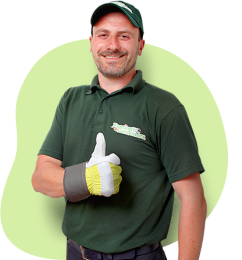 How to remove ivy from the tree bark?

So, if you’ve decided you’d like to remove the ivy from the bark of your trees, how do you go about doing so? There are several ways of dealing with this. But let’s first take a closer look at when you should consider controlling ivy growing on your trees.

Firstly, do so if the branch canopy becomes thin. Ivy tends to penetrate thin branches and tree canopies. The Fraxinus (ash) and Larix (arch) trees have a naturally thin, open crown. These trees are more susceptible to an ivy infestation and ivy growth should be controlled.

Secondly, consider ivy control when it comes to older or more damaged trees. Ivy’s thick leaves can hide cavities or areas of decay, while it can also add additional weight to the canopy that could affect the tree’s stability. This is especially the case in windy weather.

Lastly, and as mentioned above, keep your birch and acer tree barks free of ivy in order to showcase their beautiful stems and bark.

Now, let’s take a look at the various methods of controlling ivy growth on trees.

The most natural way of dealing with ivy is to cut down the creeper at its base on the ground. This will leave you with some woody stumps that may require some additional digging. If the ivy’s roots are entwined with the tree’s roots, complete removal might be a laborious and even impossible task, and this method is unlikely to get rid of the ivy’s root system for good.

There are also chemical, man-made ways of dealing with ivy, but you should consider consulting a professional for the best chemical treatments.

An often misunderstood creeper, ivy is not the bad guy that it has been made out to be. It does not compete with trees’ root systems and, in fact, is an inviting habitat for wildlife. Ivy can only do damage to older, rotting and more vulnerable trees, and to healthy trees, once it grows on and through the tree’s canopy, preventing photosynthesis from taking place effectively.

There are, however, both natural and man-made methods of controlling ivy’s growth and proliferation and this is something you will need to consult a professional about, in order to have a complete and thorough solution that will help you deal with the ivy that’s growing on your trees. With that being said, we hope you’ll look at ivy in a more favourable light in the future and think twice before you remove it from your garden.

Have a specific gardening or plant-related question?

If so, click on “Ask now”, submit your question, attach the appropriate images and press send. Your question will be forwarded to one of our Fantastic Gardeners who will get back to you with an answer ASAP. )

Useful info from our blog