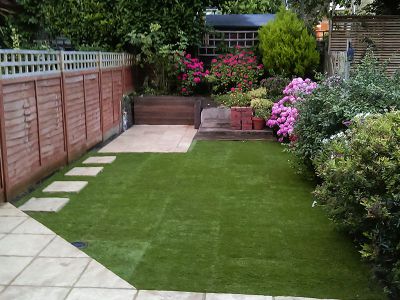 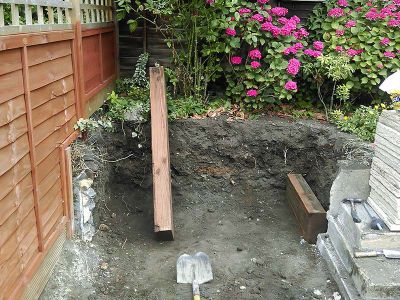 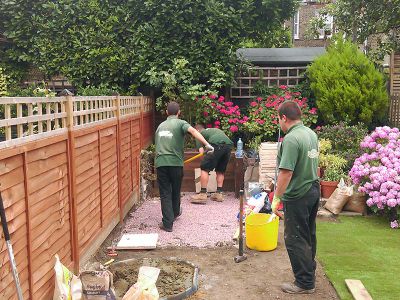 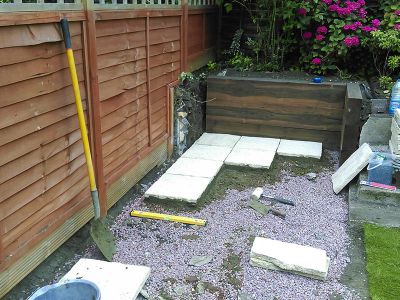 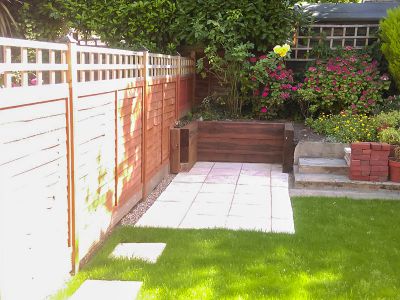 This time we were contacted to help a homeowner in Wimbledon to transform their garden into a place where they can enjoy family and leisure time. The garden itself wasn’t big, but the team had to do a lot of work to turn it into a green piece of heaven. The customer wanted a new lawn and a patio, edge the patio area, and half-way through the job asked if we could also make a garden path from paving slabs. Of course, we agreed to do it.

To build the small wall around the patio, we used 6 railway sleepers. The patio and path required the use of 50 40x40cm paving slabs, one 50 kg bag of sand, one jumbo bag of M.O.T. base, 2 bags of gravel, and one 5 kg bucket of grouting compound. We also used 3 rolls of turf, a bag of topsoil, and a bag of compost for the turf laying service. The team needed 3 days to complete the project.

Day 1: Preparation, clearance of the garden and building a wooden wall

During the first day, the landscaping team in Wimbledon had to prepare the areas for the job. They started by removing the old turf, rotovated and levelled the area where it was necessary. After that, they prepared the area for the turf laying by adding a layer of topsoil and fertiliser. The local landscapers wrapped the day by edging the flowerbeds with the wooden sleepers.

Day 2: Laying the patio and turfing

The next day, the team separated and two of them handled the patio laying. First, they laid the gravel as the base for the patio paving. After that, they began laying the patio by using the M.O.T. base before placing the paving slabs.

Meanwhile, the other Wimbledon landscaper was busy laying the new turf. During the second day, the customer asked if the team could add a small garden path toward the new patio area. After a quick consultation and an estimation, they agreed to do it on the final day.

On the third day of the garden landscaping project, the team completed the patio laying and the turf laying. They also fulfilled the customer's request and made a garden path out of paving slabs. They finished by watering the newly laid lawn and disposing of the generated garden waste.

As you can see in one of the pictures, there is a concrete base where the wooden wall should be. The local gardening specialists had to remove some of it in order to complete the patio and wooden wall.

Please be advised that prices of garden landscaping projects are based on the work done. The price you see above is only for this particular project.

Really satisfied with the services. Even though I had a request in the middle of the work, the landscaping team complied with it and made a lovely garden path. Truly Fantastic Gardeners!P.B.