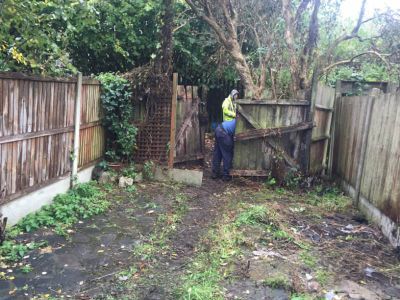 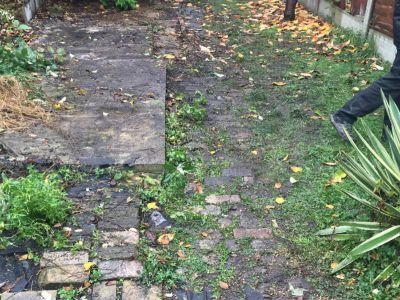 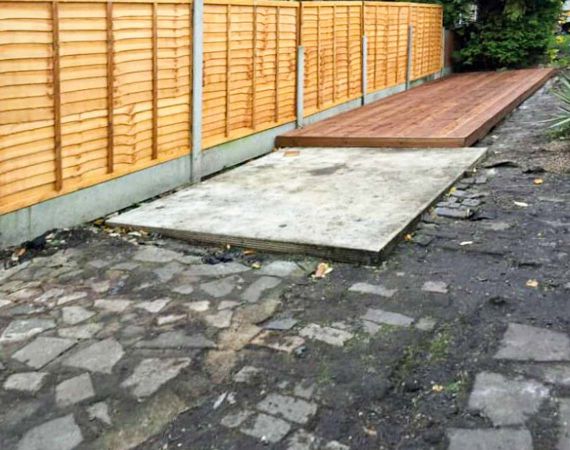 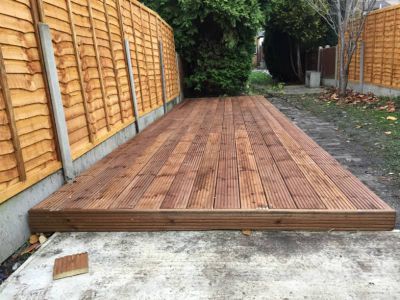 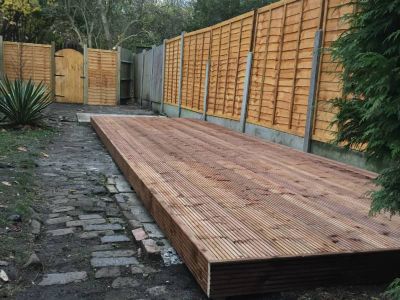 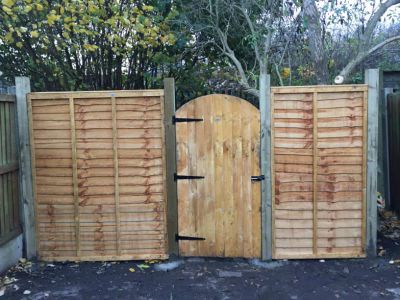 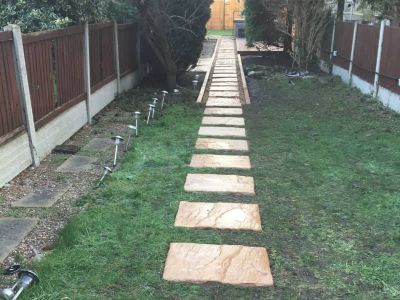 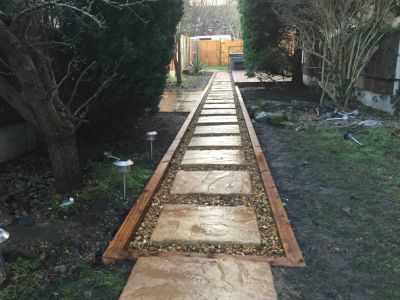 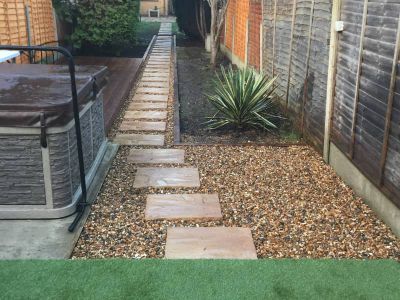 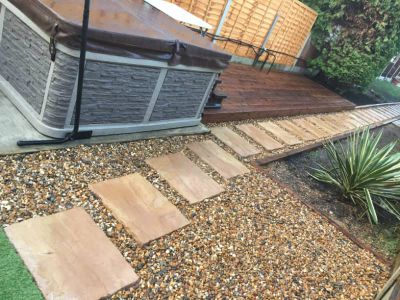 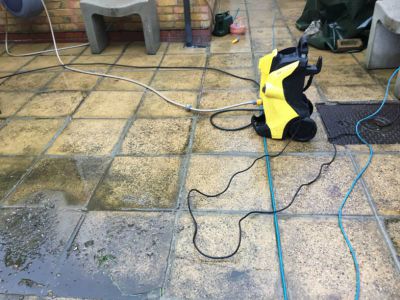 For this project, we had to send a team of three landscapers in Acton, and we used some help from Fantastic Handyman’s electricians. It was a pretty big job, and it took us 5 full days to accomplish it.

The customer wanted 27m2 of “Madrid” Astro turf; 22m pathway for which we used paving slabs 450x600mm and golden gravel; 16m2 of decking; a new fence made of 7 fence panels with a gravel border; new wooden gate; and a hot tub (jacuzzi) for which we had to lay a 5m2 concrete base. Sounds nice, huh?! Wait until you see the result!

Day 1: Delivering the materials and clearance of the terrain

With so much work ahead we, first, decided it would be best to deliver the materials at once. So, we did. The local landscapers didn’t bring them in the yard immediately, though, because they had to clear up the garden.

There were a lot of weeds to be removed, bushes to be trimmed, an old fence to be dismantled and some old paving to be removed. However, the landscaping team of three managed all the garden clearance in a day and unloaded the materials. They also took the generated waste with them for disposal.

When the team arrived, they started with the installation of the fence. Two of the guys installed the bigger part, and the other landscaper replaced a broken panel on the other side of the garden. He also installed the new wooden gate. The team of two measured everything very carefully and installed a concrete post. Then they attached the fence panels to the posts and assembled everything perfectly.

When the fence was ready, the team of two got to install the new decking, while the third expert started assembling the shuttering for the hot tub concrete base. When the decking area was ready, all three of the landscapers mixed the concrete and laid it, so it can dry until the next day.

Day 3: Installation of the jacuzzi and borders for the pathway

On the third day, the landscaping team in Acton assembled the jacuzzi, which our customer had already bought. They installed it properly and started laying the borders for the pathway of modern slabs.

Fantastic Handyman’s electrician came to do the wiring for the hot tub, later, after the landscapers had done all their job.

Day 4: Finishing the pathway and preparations for the artificial lawn

Day four was almost all about the 8-metre long pathway. The team had to be very precise, and the slabs had to be laid evenly on both sides. When all the modern slabs were in their place, the specialists laid the golden gravel and the pathway was finished.

Then, they, levelled the area for the artificial lawn, removing and adding soil where necessary.

On the last day of this landscaping project, the team separated the tasks again and got to work. Two of the guys started preparing the terrain for the artificial lawn, and the third landscaper jet washed the existing patio.

After the patio was cleaned, the whole team focused on the lawn. They installed the anti-weed membrane and laid the “Madrid” Astroturf. Then, they finished the project by laying purple gravel between the fence and the new lawn.

Note that all prices of the landscaping projects are based on the work done and materials used. The price mentioned above is only valid for this job.

My new garden is so awesome

The way the Fantastic Gardeners redid my backyard is excellent. Now I can once again invite friends over and make them jealous. And that jacuzzi is just fabulous. Huge THANK YOU to the gardeners, much recommended.J.P.